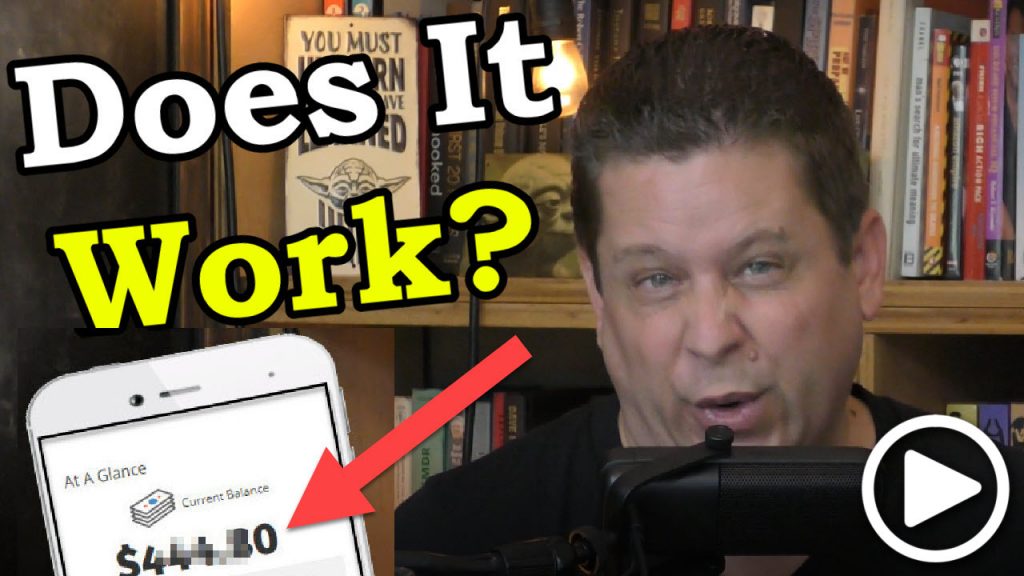 Seventy five dollars per hour. Watching. They’re boasting that you can earn as much as two hundred seventeen hundred dollars a day simply watching videos online. But does this tactic really work? Is it worth your time and effort?

And can you make a sustainable income simply sitting back and watching videos online? Today, we uncover the truth about what these make money watching videos schemes are really about.

Plus, a real way to make a real living watching videos online that you can start today even if you’re broke.

Today, we got a good topic for you.

We’re gonna be diving deep into how to get paid to watch videos online.

Where do we get paid to watch videos online?

Part One: Where To Get Paid To Watch Videos Online

First of all, you simply want to go to one of these sites.

And then when you log in, you’re going to see different jobs that you can complete for money.

These could be jobs such as filling out a survey, checking out an offer, watching a video and more.

And yes, these sites seem to be pretty legit. And yes, you can actually get paid for completing the task.

But you never really see the proof other than a screenshot with a couple of people making a couple bucks. And it looks something like this. 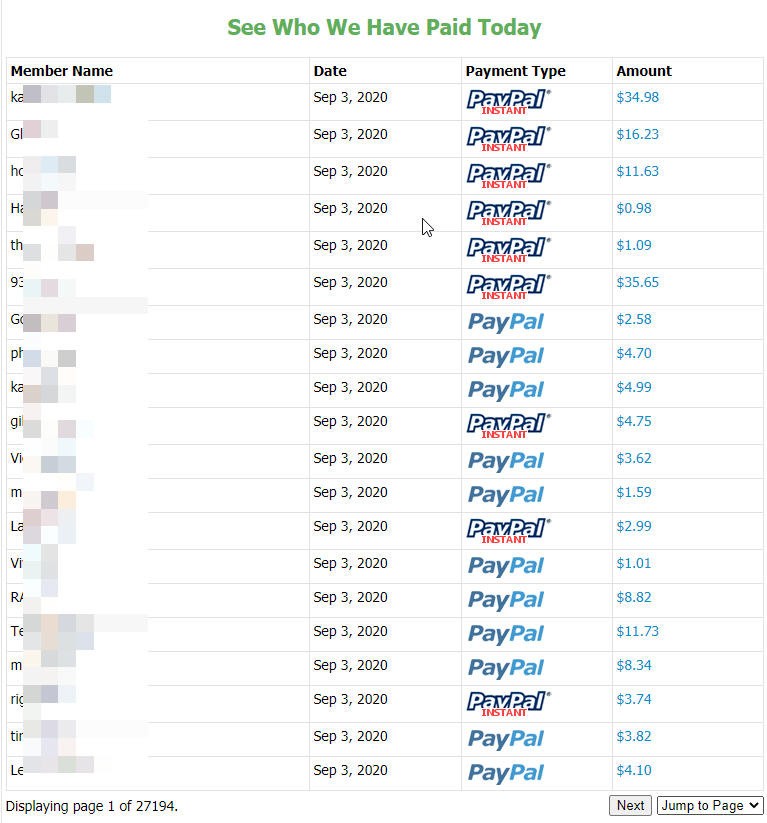 And on one of the videos I saw, they actually posted a big screenshot saying this Web site paid out three million dollars to its members. 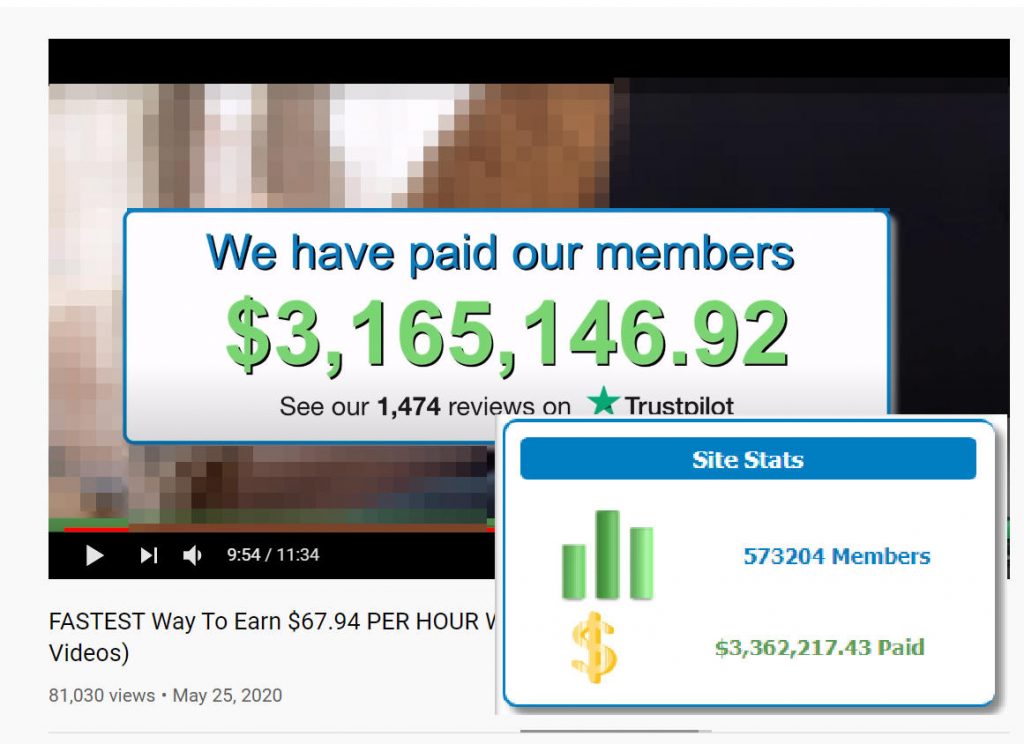 But if you dig a little bit deeper, you’re going to find something a little less than appealing.

First of all, that site has over five hundred and seventy three thousand members. And if you divide three million by five hundred thousand, the number is actually pretty small.

And after you log into your accounts, you’re going to see a series of tasks and jobs that you can complete,

like this one that says you get two thousand two hundred and seventy five points. That seems like a lot, but each point is worth like 10 cents or less. So that’s like two dollars. And in order to get that two dollars, it says, I have to submit my email address, create an account, link, my bank account. That’s not even safe.

Here’s another one that pays for dollars that says I have to sign up. Click the link in the email they send you install the app and then use the app for a long time to get a measly four bucks.

And if you were to break it down and look at the average earnings from all these five hundred and seventy three thousand members, it works out to only five dollars and eighty six cents for each member. Over all time, that’s not just in a day, that’s over the lifetime of their account.

Well, you might be saying Marcus. Yeah, okay. But, you know, I doubt everyone’s doing the work. So let’s say that only one out of every hundred members is actually watching videos and doing the work. That still comes out to only five hundred and eighty six dollars and fifty six cents for the lifetime of the member. And according to swagbucks, you get an average of 40 swagged bucks per video or swag bucks points, which equals me.

Let Me Get my calculator. Forty cents.

I don’t know where those other guys are getting their seventy five dollar an hour numbers, but in order to make seventy five dollars an hour, you’d have to watch 168 videos each and every hour, all day, every day to make the kind of income they’re talking about.

Then we have inboxdollars, which pays a paltry one copper cent per video viewed.

But wait. We got some good news at the end.

People on earnably state that they make about two dollars an hour or an average of five dollars a day.

The Penny Hoarder Blog  said she made about $7.63 cents in 24 hours, including the one time five dollar sign up bonus, which means she basically worked for 10 cents an hour.

Now, on the upside, the average Rev transcriptionist who watches videos and transcribes them completes 15 jobs and earns about $156 a month. Some of the bigger players earn up to fifteen hundred dollars a month. But again, there’s a lot of work involved, hourly – It doesn’t work out to very much.

Another site we found pays twenty five cents to share a link on social media.

So what’s the truth?

Why are people making videos saying that you can make all this money just watching videos?

Well, basically, it’s glorified click bait to get you to watch something so they can sell you on some overpriced offer of some sort.

But here on affiliate marketing dude, we always show you the real way for free.

And if you want to join something later, you’re more than welcome to.

So when they say you can make all this money, just simply sitting back and watching videos, I think we need to click the B.S. button.

So now that I’ve showed you what doesn’t work. Well, let’s talk about what actually does work. So we can push the cash button and make some money.

Disclaimer no, you don’t just watch videos and get paid in this method.

There is a little bit of work involved, but what I think you’ll find is it pays far more than all the other junk.

That is the shortcut to riches. As Zig Ziglar always says, the elevator to success is out of order. You need to take the stairs.

And here are the steps you need to take.

Step number one is to pick a topic that you’re going to watch videos about. This could be something that you personally want to learn. Maybe it’s how to train a dog, how to make money, how to set up a website, how to learn Excel. Motivational quotes or literally anything.

Or if you want to do this free, you could go to a free platform such as Wick’s We Blee or even a free blogging platform. However, I highly recommend that you get your own Web site.

There’s a lot of reasons to do this. We’ll cover them in a later video.

If you want to do that, you can go to gohubsite.com. Start your first blog in literally like 30 minutes.

The next thing we’re gonna want to do is we’re going to do some research on our topic. You can use some free keyword tools out there or some paid keyword tools. Doesn’t really matter. All we need to do is find keywords in our market. 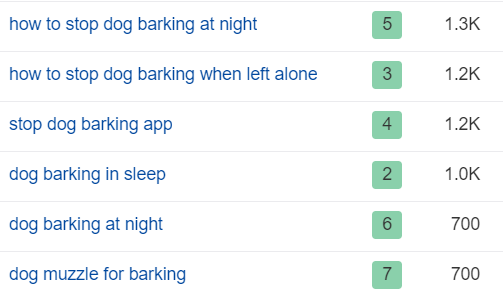 I’m going to look for the ones with the lowest score so that I have a better chance of getting traffic from Google. Yahoo! And the other search engines.

Then I’m going to take this list, write it down or copy it to a notepad, because this is going to be where I start to find the videos to watch.

Next, what I’m gonna do is watch the videos. Yep, that’s right. Grab some popcorn. Sit back, relax. Watch the videos and take some notes.

You want to watch very targeted videos based on your keyword.

Take some notes and compile the notes. Very simple.

You’re watching the videos anyway. It’s not that hard to do.

Step number three, you’re going to turn those notes into a little keyword specific report for your blog.

You can go out there and say, well, I watched the top 10 videos on how to stop your dog from barking at night.

Here’s what I found out.

And then you just posted on your blog and get some traffic. Pretty easy, right? But, Marcus, where does the money come in?

If I get some of those visitors to come to my site, I could simply put an affiliate offer for this bark stop and I get paid forty two dollars every time they buy this thing.

It had only cost the customer thirty nine dollars.

So effectively, I’m getting like one hundred and two percent commission. Pretty cool, right?

I can also promote all kinds of clickbank offers that have to do with dog training and dog barking and all kinds of things of that nature. 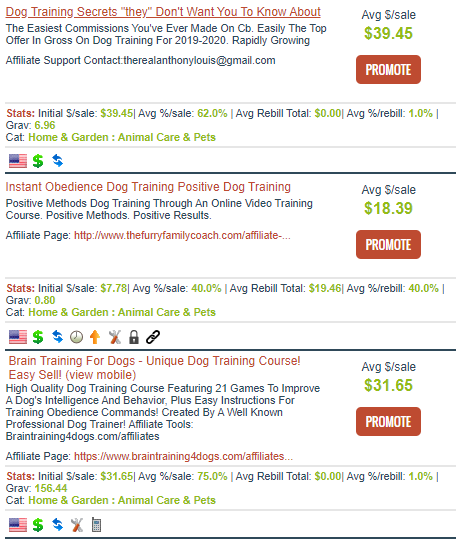 I can also put ad sense on my site and make money every time people click on the ads. It’s actually very simple.

But wait, there’s more in our bonus step.

You can actually make videos about what you learned from the videos you watched. 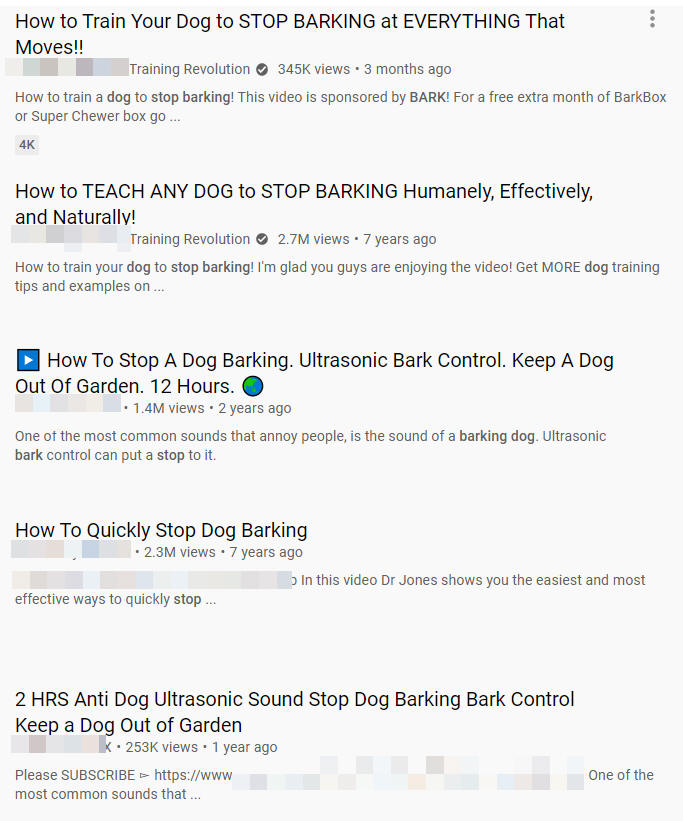 Now, very important. We’re not copying the videos. We’re simply sharing what we learned after watching five or 10 different videos.

Case in point, this video here. I actually made after watching five or six different videos on how to make money watching videos. Now, most those videos were junk, but I was able to compile what I learned and actually turn it into a video that gets me visitors.

That gets me people to click. And makes me money, which is pretty cool. And it’s not that hard to do.

You simply take the report that you wrote, either record the audio yourself, outsource it to someone on fiver, or even use an automated software to generate a voice based on the text. Then you put a little clip art, some text, and bam, you have a video that is based on a very popular topic that can get you lots of views.

Now, the key here is to go through and line this up the right way. What you’re gonna do is you’re gonna watch a video, you’re gonna make notes on the video, then you’re gonna put those video notes on your blog. You’re going to put your affiliate offers on the blog as well. That way, when people come, they click the offer and you get paid.

So instead of settling for ten cents to watch a video, what if you could make ten cents a dollar, ten dollars, fifty dollars or more every day from watching that same exact video just by putting a little bit of effort. And again, if you follow the bonus step, not only will you have blog posts out there driving people to your affiliate links which put money in your pocket, you will also have videos driving views which will drive people back to your blog and back to your affiliate links.

And you, my friend, can stop messing around with the videos that teach you the junky ways that don’t work. And you can actually start going out there to make money.

And actually, a friend of mine, Evan Carmichael, does this exact same thing.

This guy has built a multi-million dollar business simply compiling information that he learns from multiple video sources. He puts them together in his own little video and in his actual books he publishes. And boom, he’s off to the races, getting lots of traffic, making lots of money in a very simple way. Watching videos, taking notes and laughing all the way to the bank.