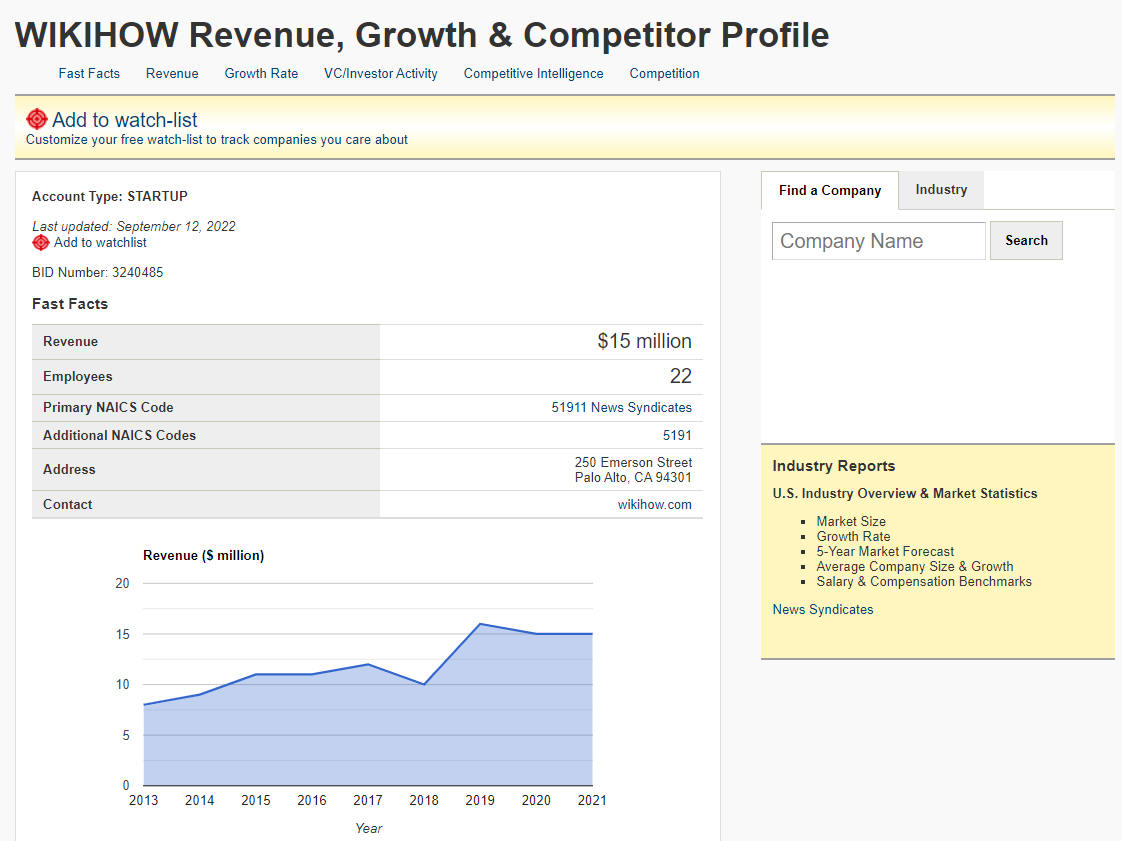 as you can see here according to incfact.com they are making upwards of 15 million dollars per year with this simple content driven business model.

according to ahrefs and semrush the traffic wikihow is getting should be worth over $20 Million Dollars Each And Every Month… so why are they making just a fraction of that… more about this later.

Wikihow is among the resourceful sites on the web, and we have to credit its business model and way of operations. With over 40 million monthly visitors, Wikihow has become among the most revered “How-To” sites that help in virtually anything. But while the site seemingly gives the internet’s “big Fish” like Wikipedia and New York Times a run for their money in a competition, what exactly is their strategy? This article dives into the Wikihow business model and what makes them a successful internet business.

Jack Herrick, the Wikihow founder, created the site in 2005 in Palo Alto, California, to help people find their way around doing simple how-to tasks. Back then, there weren’t so many sites with this simple yet helpful content. For Jack, it was an opportunity worth giving a shot and proved to be one of the best decisions he’d make. This site’s owner and managers have kept things to themselves, and their business model has entirely been conservative.

Wikihow is a hybrid organization and an open-source site with its sights on profits for value. Despite nearly 30 employees working around the clock to create content and publish how-to guides, they also allow users to offer a piece of their minds. That makes the site rich in helpful content, with users contributing to its vast database of over 235,000 articles.

Social sites became a craze just about when Wikihow launched, and people started turning to the internet for answers about the most basic and intuitive processes. It was a niche of its own, offering solutions and more guided steps on a vast array of topics that Jack decided to delve into.

Of course, sites like Wikipedia and other similar ones had already stamped their presence. But these sites weren’t as helpful since they mainly helped with more complex topics. So, Wikihow unrooted a solution &ndash; approach the niche with simplicity and an easy-to-understand way.

Nonetheless, this site has combined more than just one strategy to make it a success, and here’s more to what has made its business model a hit.

This model is driven by content and in content ads by google adsense and other ad networks. 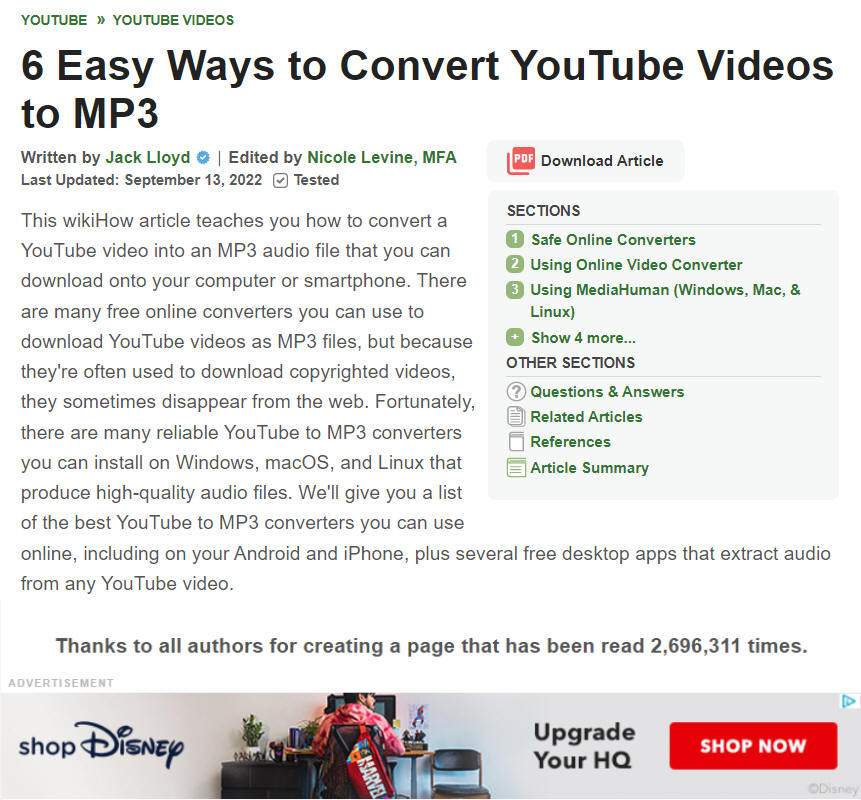 as you can see here within the articles lie ads… when these ads are clicked on… wikihow gets paid. 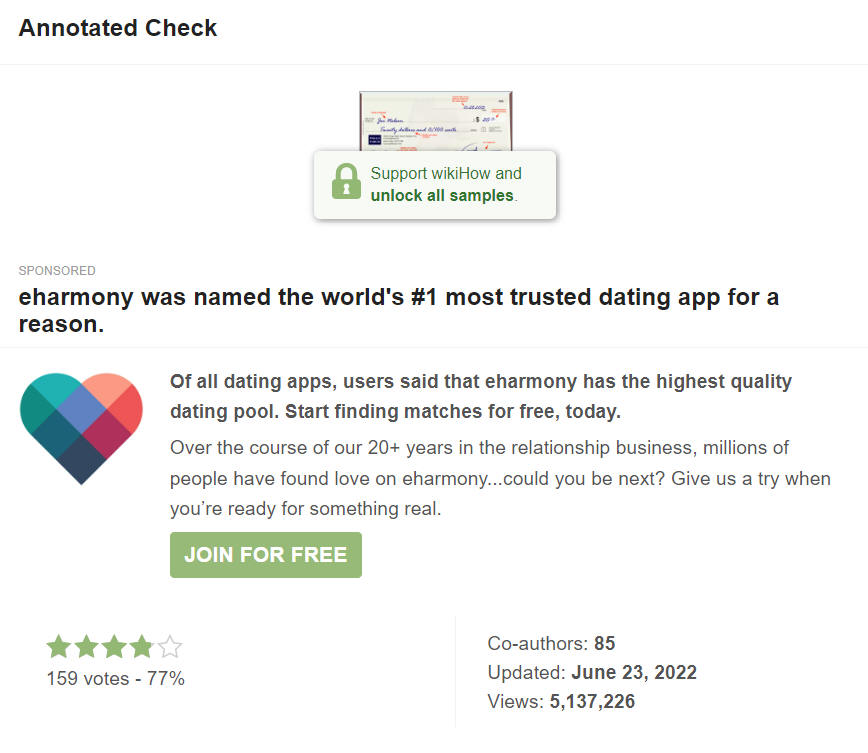 note the sponosred eharmony ad that actually blends in with the content.

Jack approached his business like any SME that starts from a home office from the word go. But instead of advancing into working in an office, later on, he’s opted to make the work-from-home model his approach to doing business. The idea was to use as few resources as possible, including funding from their coffers and not from external investors.

Bootstrapping has never been a solution to the company’s capital issues. Much credit, however, goes to the founder’s opening approach to doing business, allowing no external monetary help. Jack has always maintained his identity and has strived to keep every piece of information he publishes according to his style and how he wants it. That’s quite justified since someone new buying into a business becomes a stakeholder, meaning they’ll have to make part of the decisions, compromising the original model.

Wikihow is a hybrid organization that aims at making a profit by trading helpful resources to people seeking information in doing simple and complex tasks. The company operates privately, and most affairs bounce between the people in the mantle of the organization. But essentially, the main aim is to make a profit while making information available.

A few other companies use a similar approach, including eHow and Wikia. However, the numbers don’t lie on Wikihow’s part since it seems way ahead of the others. Wikihow makes lots of profits on its site, publishing content and videos. It’s seemingly masked the idea of gaining profit from the information they offer but reaping big in the background.

Like Wikipedia, Wikihow allows people to edit information and insert details in layers that the team approves. That’s relatively easy to keep their content factual and updated at all times. However, that comes at a cost and problems with information’s authenticity have marred the site for quite some time. But Wikihow now has a proficient quality review process called “New Article Boost.”

Most of this site’s unverified information doesn’t show on their feed and dashboards, and it’s helped retrieve its authenticity among users. The review team usually screens and filters out incorrect information or marks it as {{stub}} or {{format}}. The site also leverages help from volunteer writers who submit articles for review before publishing if they meet the Wikihow writing criteria.

Despite being open source and having its services aimed at serving the public, Wikihow operates privately. Jack Herrick lauds privacy as an essential secret weapon for any Evergreen Company and uses that to get an edge over his company’s competitors. “My competitors have no idea of what my strategies are, and it’s a great advantage to me,” he remarks.

Any writer submitting an article for review doesn’t own it in terms of the monetary gains but gets the credit in the acknowledgements. Authors don’t usually relinquish the right of ownership after they get on Wikihow, but it gives the company the right to use it how they want. Contrary to popular belief, Wikihow only pays its employees under its private ownership for creating, editing and publishing articles and not community contributors.

wikiHow operates under the Creative Commons Attribution-Noncommercial-Share Alike 3.0 license, allowing modification and use for non-commercial purposes. Writers willing to create content can do that under this license’s protection, and Wikihow can publish them under the requirement that they attribute to the original authors.

Usually, the original authors have complete ownership of the articles they publish on Wikihow and can use them anywhere they want to. However, that gives Wikihow an irrevocable license, giving them the right to use your article how they want to.

Wikihow has grown tremendously since its launch on January 15th 2005. It attracted investors and prospective partners during that time, promising to scale the company’s operations to newer heights. However, Jack Herrick has remained adamant that he only wants to focus on internal growth rather than getting outsourcing help from other external parties.

That hasn’t stopped the company from progressing and growing better by the day. It’s helped maintain its trademark and identity from the original concept of developing one of the world’s first how-to articles and information.

The company started grabbing attention a year after its establishment, and One Laptop per Child, a non-profit foundation, made Wikihow one of the content sources for their devices. The company then reached more than 20 million monthly visitors with over 30,000 articles published during the wake of 2009. The company’s proliferation peaked in 2014 when Google, the world’s most sought-after search engine, chose Wikihow as one of its launch partners for Google Contributor.

How Much Does Wikihow Pay Writers and Content Creators?

Writers on Wikihow are mainly volunteers and don’t get a dime out of the articles they submit to the site. However, the few employees working at Palo Alto earn from the company’s sales. Keep in mind that Wikihow is an open-source site where you can submit an article for review and approval before publication. And it takes tons of review to ascertain if your paper meets the company’s writing criteria.

A content writer at Wikihow earns about $28 an average per hour, as Glassdoor states, but writers on higher echelons make better. However, the pay can go as much as $45 per hour and an additional $2 can top up this earning every hour. The payment varies according to the work capacity since animators make on a “per-portrait” basis, and their aggregate pay depends on their output.

Higher ranking executives like Elizabeth Douglas, the company’s CEO charged with the management and overseeing capacity, earn way more than the writers, with the values reaching about $200,000 annually. The higher the ranking in the company, either as a writer or executive, the better your pay.

Like most companies, Wikihow has a vigorously active YouTube channel showcasing their work and creation. With over 290,000 subscribers, Wikihow boasts a huge fan following that finds the information on the channel more practical and valuable. Most of the company’s videos are short and go marginally over a minute long. However, they’re incredibly informative, guided and in-depth.

Each video addresses an issue that people search for answers to, from how to get your first kiss right to blanching peaches. However, the channel also has numerous other technical topics, including how to make an electromagnet to explaining the Harry Potter iPhone hack. The channel has over 200 videos, adding newer ones every day and giving the site a commanding presence in this space.

How Many Employees Does Wikihow Have?

Wikihow has about 15 to 30 employees, and everyone works in a varied capacity, including creating articles, proofing and publishing. However, about 14 of these employees are involved in the core of the business, driving operations and getting the house in perfect order. People the company doesn’t employ can still submit articles for review before publishing, and although they won&rsquo;t relinquish the rights to claim such work as theirs afterward.

These employees usually work from a house in Palo Alto in a free environment, unlike an office. Jack does that purposely since he believes that workers in a more restricted environment tend to be less creative, but letting them break free improves productivity. Forbes, however, claims that nearly more than half of the staff is female.

How Much Profit do Wikihow Make Per Year on Average

Wikihow makes money through Ads and the traffic it gets from its innumerable visitors. Sources claim that the company earns about 5 million dollars in annual profits. That’s quite an edge compared to its main competitors’ profits, such as How-To Geek LLC and NutritionFacts, making almost similar. This annual profit is relatively high for an internet-based company, thanks to the soaring demand for quick but authentic internet knowledge.

WikiHow also records one of the highest revenues from running Ads on their site annually. Reports suggest that the company collects marginally over $100 million in revenues, much higher than a host of other cloud-based, open-source companies. Perhaps this figure could be much higher in the future when the internet would be a mainstay in offering informational resources.

How Does Wikihow Publish Factual Information on Its Site?

Given the nature of Wikihow’s operation and business model, it’s easy to wonder if the information published is legitimate, factual and authentic. The truth is that this information usually undergoes rigorous vetting by the company’s employees, ensuring that every bit of detail is accurate. This approach is relatively different from Amazon’s and eBay’s, which allow their customers to publish reviews, some being sentimental and biased dislike.

WikiHow articles usually follow set criteria, including a more straightforward approach to answering questions and optimization for keywords. And although it has an advantage in ranking as a member of the Google Contributor, this site publishes properly optimized articles for better rankings. Besides, virtually every top is a how-to, making it an expansive database for helping people achieve results in everything.

Get Paid To Write Articles… sites that pay